1Dossier is built in the believe that we can make a difference in your industry by minimizing administrative tasks, increasing security and reducing financial and compliance risks. 1Dossier Contract Signatures and integrated Payment Processing brings together the most advanced technology of our time to your industry.

The technology, security, beautiful system architecture and processes are just for you to know.

In reality, all you have to do is upload your contract into your agent dashboard, fill in a few questions et voila !  Both parties will receive an online access to digitally sign the contract. Once all done, the contract is then stored on the Private Blockchain with a set of instructions such as automatically triggering payments. Now you have the most advanced contract and payment processing system in the world.

The open-source nature of the 1Dossier contract means that it will execute exactly as the source code dictates and ensure that each party honors the transaction agreement.

A 1Dossier contract will exist on the 1Dossier Private Ethereum Blockchain where it will self-execute according to the pre-agreed contract conditions without any direct human involvement.

1Dossier contracts are stored on the 1Dossier Private Ethereum Blockchain where they have all the resources permanently available to them in order to execute and remain in existence.

The Blockchain contract is digitally signed with a unique private key held only by the Tenant and the Landlord. Once published a contract becomes irrefutable, irreversible and unalterable.

The enforcement of the contract includes the rent and the bond payment determined into the contract and is facilitated with multiple payment types in any currencies.

The 1Dossier Contract Signature (Smart Contract) and integrated Payment Processing brings together the most advanced technology of our time to your industry. 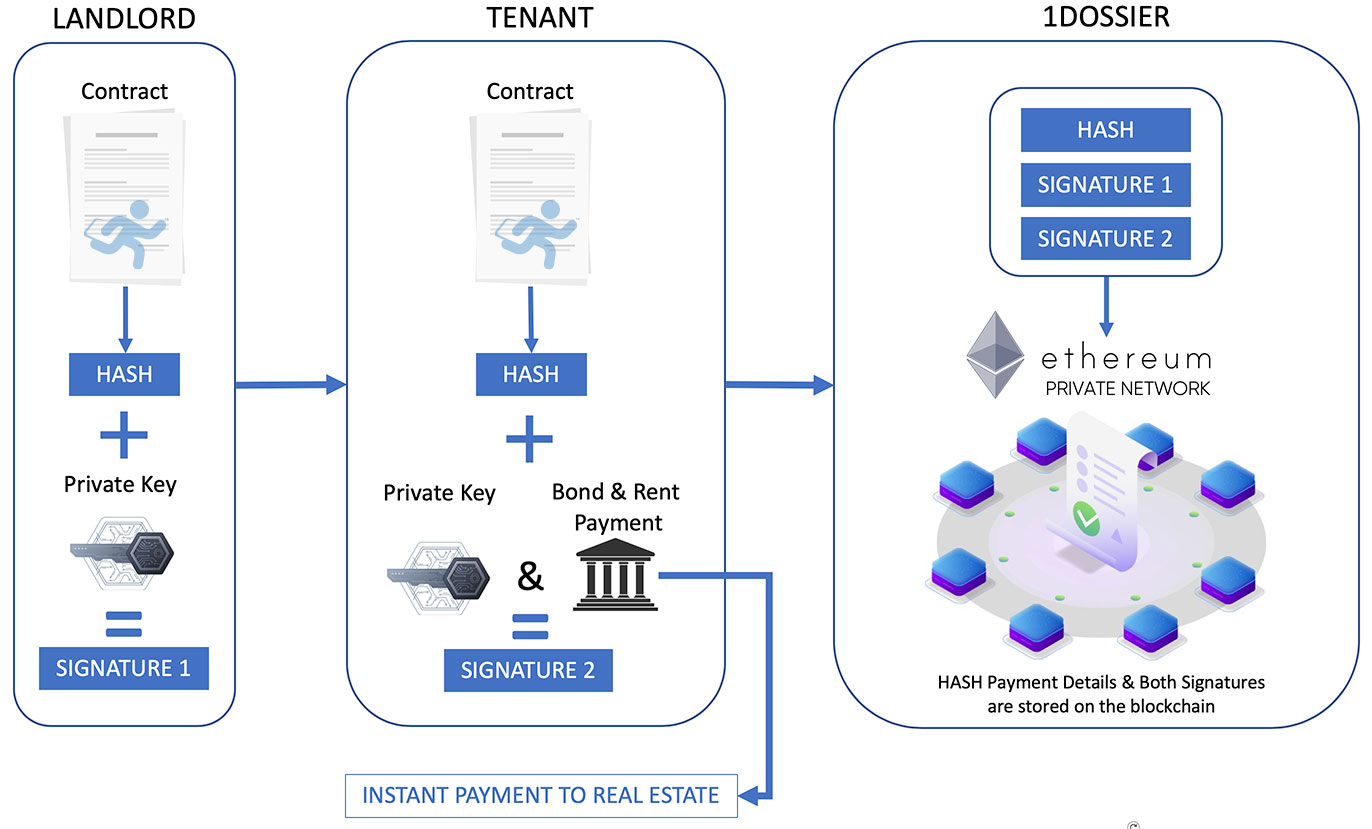 WE ARE WORKING ON THE FUTURE OF PROPERTY TECHNOLOGY

1Dossier was always built with the future in mind… 1Dossier technology soon will track sales, history and paperwork associated with properties such as, land documents, builders, renovations, pest controls, sales prices, rentals and every available details will be contained in ONE immutable file across a Private Blockchain.

SOME KEY ATTRIBUTES OF BLOCKCHAIN TECHNOLOGY

No central authority to control or manipulate it. All participant talks to each other directly. This allows for data exchange to be made directly without third-parties involvement.

The ledger is spread across the whole network which makes tampering not so easy.

Cryptography is used for the security services to make the ledger tamper-proof.

This is the most critical attribute of all. This gives blockchain the ability to update the ledger via consensus. This is what gives it the power of decentralization. No central authority is in control of updating the ledger. Instead, any update made to the blockchain is validated against strict criteria defined by the blockchain protocol and added to the blockchain only after a consensus has been reached among all participating pee

1Dossier “Smart Contract” uses an Etherum private blockchain, so the nodes participating in transactions are authenticated and authorized machines within the organizational network.

Ethereum is a programmable blockchain, it allows 1Dossier to create operations, coded as Smart Contracts, deployed and executed by the Ethereum Virtual Machine (EVM) running inside every node.

DON’T WORRY… Ethereum Blockchain is only for you to know!

In reality, all you have to do is upload your contract into your agent dashboard, fill in a few questions such as monthly rental price, lease period, bonds, start and end date, add the name and details of the owner…et voila !  Both parties (Tenant and Owner) will receive an online access to digitally sign the contract, then to finalise the conditions, the tenant will be making an online payment for the bond and rent. Once all done, the contract is then stored on the Private Blockchain with a set of instructions such as automatically triggering the monthly rent payments for each of your tenant. Now you have the most advanced contract and payment processing system in the world.

How does it works?

It works with Blocks, whereas spreadsheet works with “rows” and “columns”. A blockchain is a distributed computing architecture where every node runs in a peer-to-peer topology, where each node executes and records the same transactions. These transactions are grouped into blocks. Each block contains a one-way hash value. Each new block is verified independently by peer nodes and added to the chain when a consensus is reached. These blocks are linked to their predecessor blocks by the unique hash values, forming a chain. In this way, the blockchain’s distributed dataset (a.k.a. distributed ledger) is kept in consensus across all nodes in the network. Individual user interactions (transactions) with the ledger are append-only, immutable, and secured by strong cryptography.

What does Hashing means
A hash is a string or number generated from a string of text. The resulting string or number is a fixed length and will vary widely with small variations in input. The best hashing algorithms are designed so that it’s impossible to turn a hash back into its original string.
SHA-2 consists of a set of 6 hashing algorithms and is considered the strongest. SHA-256 or above is recommended for situations where security is vital. SHA-256 produces 32-byte hash values.